Travelers, take note: inbound and outbound transportation has been disrupted by today's snow.

Flights at both Hongqiao Airport and Pudong International Airport were either canceled or delayed yesterday and today, and more delays are likely following the issuing of a yellow blizzard alert this afternoon.

As of this morning, around 20 flights were canceled and another 40 delayed due to the snow, Shine reports. The snow prompted an alert for potential flight delays from the city's air traffic controller, with takeoff and landing capacity expected to be reduced by 30 percent.

Airport staff are working around to clock to defrost aircraft prior to departures, while workers have been spraying melting agents on the runways. The air conditioners have also been given extra inspections to ensure the terminals remain warm inside. Exposed water pipes, valves and heaters have been wrapped in heating materials at both airports. Meanwhile, throngs of passengers were seen lining up at Shanghai Railway Station's refund windows after the city's Railway Bureau announced that some trains would temporarily suspend service between January 24 and 26. The cancellations affected over 200 trains bound for Anhui, Jiangsu and Beijing that were scheduled to depart from the city's three major railyway terminals.

Passengers with tickets for canceled trains are able to apply for refund within 30 days and will not be charged any extra fees.

The city's Meteorological Bureau also issued a separate yellow alert last night for road icing, warning that the streets could be slippery for both drivers and pedestrians. That warning remains in effect. 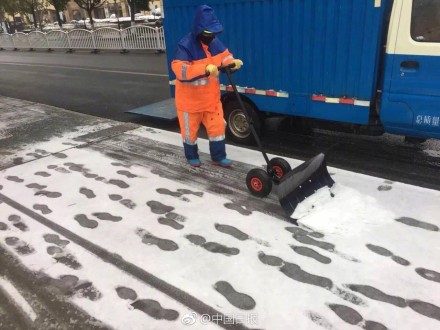 The snowfall will continue to be heavy this evening and tomorrow morning, with forecasters expecting parts of the city to see between six to 10 millimeters of snow by Friday. Roads could also be covered by as much as three to five centimeters of snow, which is expected to fall until the early hours of tomorrow morning.

The snow is expected to let up by tomorrow afternoon.

Planning to fly in or out of Shanghai during the snow storm? Visit these sites to get real-time information on delays and cancellations: